(Houston, Texas – April 1, 2019)   National Autocross News (NAXN), the premier independent news source for autocross in North America, announces the formation of the National Autocross Championship by NAXN, a multi-day double course event located at some of the most unique autocross venues in the country. 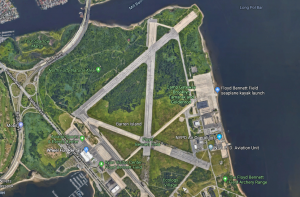 The inaugural event will take place from Aug 9-11th, 2019 at Floyd Bennett Field in Brooklyn, New York in the shadow of New York City.  (Future Championship locations will rotate every year to different regions of the country).    A full rule book will be release in the coming weeks, but classing will follow the familiar classing of the SCCA’s Solo program.  The winner will be determined by average finishing place for each day over the two days, with lowest total time serving as the tie breaker. Drivers will not be required to compete in the dark.

Contingency programs are still being confirmed but most major auto manufactures are on board (Hydundai, Dodge, and Alfa Romeo are just a few).  Contingency will pay out to 10 places in open classes.

After negotiating a lucrative television and digital rights broadcast contract, the event will be broadcast live on ESPN 8 “The Ocho”.  Additionally, thanks to key sponsorships from Miller Brewing Company, Peak Antifreeze, and Discount Tire, the organization will be able to hire professional workers at all positions, leaving the driver to focus on competition and comradery.

We look forward to establishing this annual event as the true World Autocross Championship over the coming years.  For more information as it becomes available visit www.naxn.org.